Emraan Hashmi is also known as the serial kisser actor! If you are interested in knowing about his biography then you have to check out this post. His date of birth is 24th Marth 1979. He is one of the talented Indian film actor. He has mostly done romantic films. He has managed to get three of the Filmfare award nominations. He can be called as one the established and leading actors in the Bollywood industry. Before he became an actor, he used to work as an assistant for the film Raaz that was released in the year 2002. It was in the Footpath film that he made his acting debut. Later on, he did the Murder film and that film turned out to be a massive and biggest one commercial success. His other famous and blockbuster films are Jannat, Zeher, Raaz: The mystery continues and he too gave commendable performance in the films like Jannat 2 and Murder 2. He did Raaz 3 and Hamari Adhuri Kahani. Now have a look at his other family and wife children details:

His birth place is Mumbai, Maharashtra, India. He is from a Muslim family. His parents names are Anwar Hashmi and Mahira Hashmi. His father was also used to be an actor. His father was the son of an actress named as Purnima Das Verma. Emraan Hashmi is also the nephew of Mahesh Bhatt who is a famous producer. He has too relation with Mukesh Bhatt. This actor is the cousin of Mohit Suri who is a director by profession. Actress Pooja Bhatt and actor Rahul Bhatt are his cousins.

Emraan Hashmi And His Father Photo

Emraan Hashmi And His Mother photo 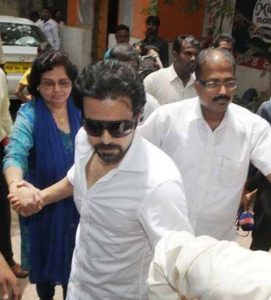 Emraan Hashmi And His Brother Photo

It was in the month of Dec 2006 when he got married with Parveen Shahani. Their wedding ceremony took place in an Islamic kind of way. They had a six year relationship and after that,both of them got married. They have a son. His name is Ayaan Hashmi. He was born on 3rd Feb 2010. Right now, his son is at the first stage of cancer. We all pray for him!

Emraan Hashmi personal life details will more be given to you so stay tuned with us! May his son recover from this disease as soon as possible.