Get Navjot Singh Sidhu Family Pics Wife, Daughter and Biography is all here. Navjot Singh Sidhu is himself a great personality! He can host, he can play, he can make us laugh, he has that outspoken abilities! Moving on with his family and personal life details, his date of birth is 20th Oct 1963. He has been the former one Indian cricketer. He has been the member of the Parliament from the Amritsar. He remained the member from the time duration of 2004 till the time of 2014. When he got retired from the Indian  cricket then Navjot Singh planned and made up his mind to take up commentary as a profession. He too decided to become a part of politics. We now see him doing the hosting of many cricket shows. Just few times back, we have seen him in the show episodes of Comedy Nights with Kapil Sharma. He acted as a judge of the show named as The Great Indian Laughter Challenge. We have seen him appearing in other kinds of shows too like Finjabi Chak de. He was the part of Big Boss 6. Now you can have a look at his wife and family details: 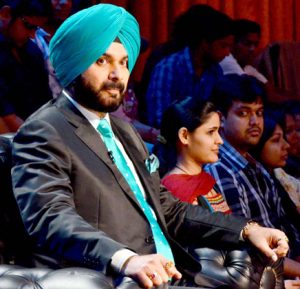 His birth place is Patiala, Punjab, India. He belongs to a Jatt Sikh family. His father name is Sardar Bhagwant Singh. If we talk about his father profession then his father used to be a cricket player. It was also seen that his father had this wish to see Navjot Singh Sidhu as one of the top class cricketers in the Indian cricket sector.

Navjot Singh Sidhu With His Family

He tied a knot with Navjot Kaur Sindu. His wife is a doctor by professions. She is also a member of the Punjab Legislative Assembly. Both of them have two children, they have a son and a daughter. Daughter name is Rabia and son name is Karan. Recently, this man has also been diagnosed with some disease which is related to brain. We all just pray for him may he come out to be healthy and stronger once again.

Navjot Singh Sidhu With His Wife

Navjot Singh Sidhu is one of the dynamic personalities known to us by far! We will let you know more about his family background so stay in touch with us.